The raised garden beds installed last year at Main Street Housing not only benefited the residents, but also the community as the tenants happily shared their plentiful harvest. In fact, they enjoyed it so much that they decided to do it again this year.

Mark and Tim went out and purchased tomato, pepper, green bean, and radish plants and began the process of tending and weeding the garden daily. FROM’s Main Street Housing volunteer work crew installed an outdoor faucet to make the watering easier this year which both men appreciated.

Tim said they wanted to do the garden again because “it’s a benefit to us” and, Mark added, “we are good at it and it’s fun, you know.”

Tim said when you grow your own food “it makes you more appreciative because you spent the time on it.”

They plan to can some of the vegetables and enjoy them fresh. They have also blessed others by donating their harvest to the FROM Food Pantry and some local churches..

The project was led by Eagle Scout Candidate Collin Clark, with support from his brother Carson (an Eagle Scout), and his parents Christopher and Jennifer Clark (troop leaders). Collin planned and budgeted for the project and also secured donations and discounts from Standard Lumber and Supply, Timpson’s, Tip Top Gravel, the Clark family, and anonymous donors.

Lowell Boy Scout Troop 102 and their parents helped build and install the raised garden beds, remove fencing and level the ground around before adding soil and mulch to the area around the boxes.

Main Street Housing tenants then planted three varieties of tomatoes, six different herbs, peppers, melons and squash. Each of the four tenants looks after each other’s plants, waters, and weeds (they haven’t used any pesticides). Mark says the garden gives him something to do and he enjoys coming out in the morning and evening, “it’s a peaceful spot to sit.”

“We were hoping to grow enough to be able to donate to the [FROM] Food Pantry,” he adds.

In fact, they grew enough to not only donate back to the pantry, but also hand out their bountiful crop of tomatoes to many people they meet.

It truly has been an example of how generosity can  grow and bloom when the community comes together. 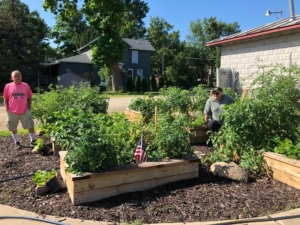 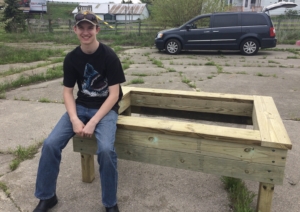 A Lifetime of Caring for Others
Scroll to top
Sign up to receive Thrift Store sales and FROM news!